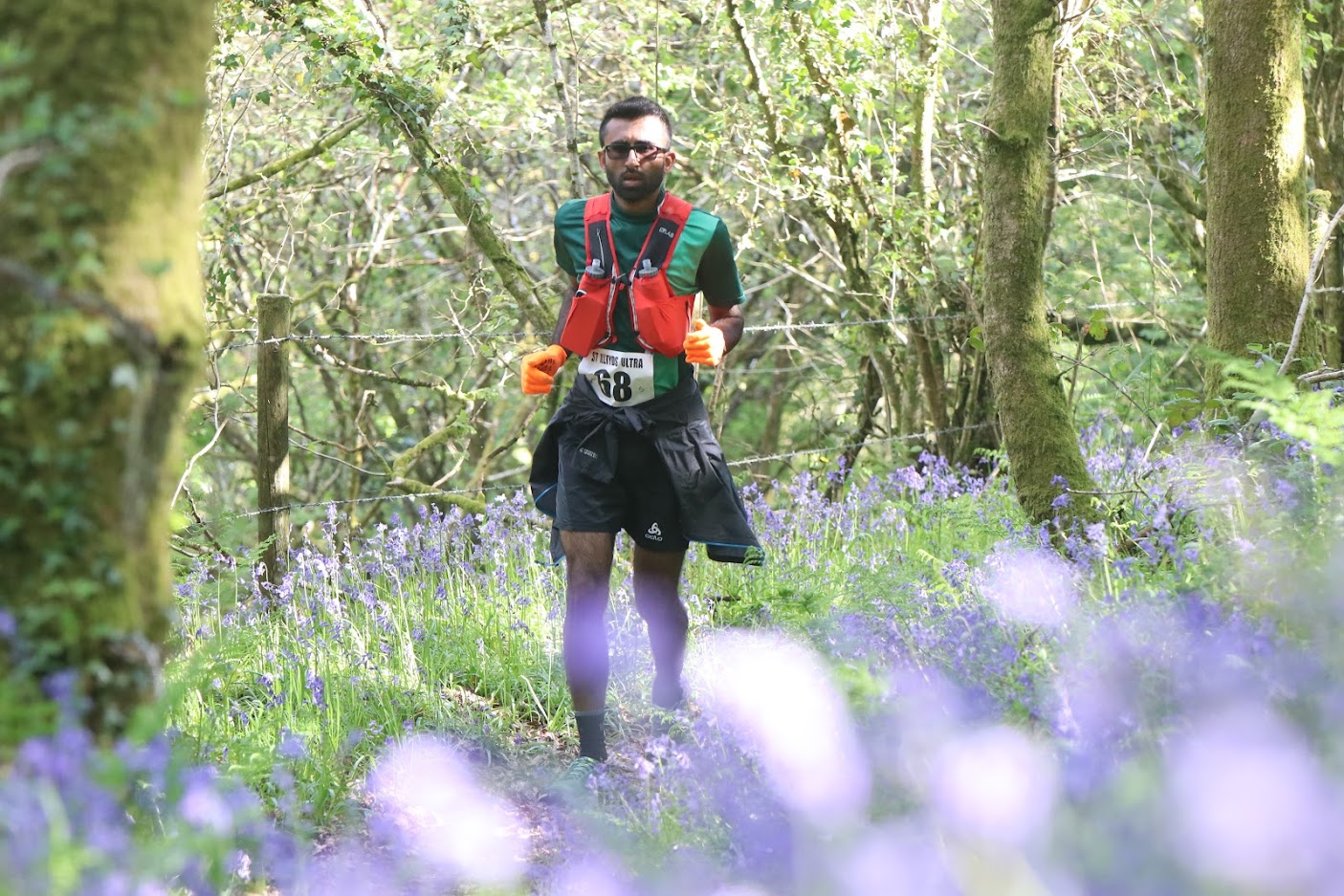 Taking place five weeks from my main goal race of the year, Race to the Tower, this particular race was booked in to take advantage of the bank holiday weekend by using a scenic, challenging and highly regarded ultra marathon to serve as another timely training opportunity and to ensure that I continue to absorb myself into my philosophy of fully enjoying the process of the journey that I am currently on.

This race was the first I had actually booked when looking for intermediate training opportunities before my double marathon and would have served as my first ultra (I count Equinox24 as an endurance event) but that obviously changed after entering and completing the Manx Mountain Marathon during Easter. Having said that, the difference between a category AL fell race and what is simply just an extremely hilly ultra is an important one. Therefore, in a way, this was my first training race before the big one as it is the one with the most comparable conditions, course profile and terrain.

With the race Sunday morning, we drove down for this family holiday on Friday night to our hotel in Llanelli town which was around a fifteen minute drive from the race start. Saturday was spent exploring the Gower Peninsula, which in 1956, became the first area in the UK to be designated an Area of Outstanding Beauty. That designation definitely lived up to the billing and the weather was perfect for exploring this piece of coastline, extreme winds right at cliff-edge notwithstanding.

After a day of exploring and eating, we got back to the hotel to witness a worrying sight. A DJ setting up in the foyer with some very big speakers. Suffice to say this ‘hotel’ was doubling down on the services it offered and we had the pleasure of being subjected to wall shaking music until around 03:00 as the ‘entertainment’ progressed into the night. Lying in bed, I have to admit my mind wrestled with what state of mind and body would cause me to abandon the race in the morning due to what I perceived would be an increased risk of injury that running without sufficient rest would invariably bring, especially after having put my body through a gruelling session of Phil’s Hills a few days earlier.

Fast forward to morning and fortunately, the tell-tale signs of a restless night were not present and I decided to go with feel and not worry about however many hours and minutes I had actually slept. Toast, shower, grab my kit and off to the start. 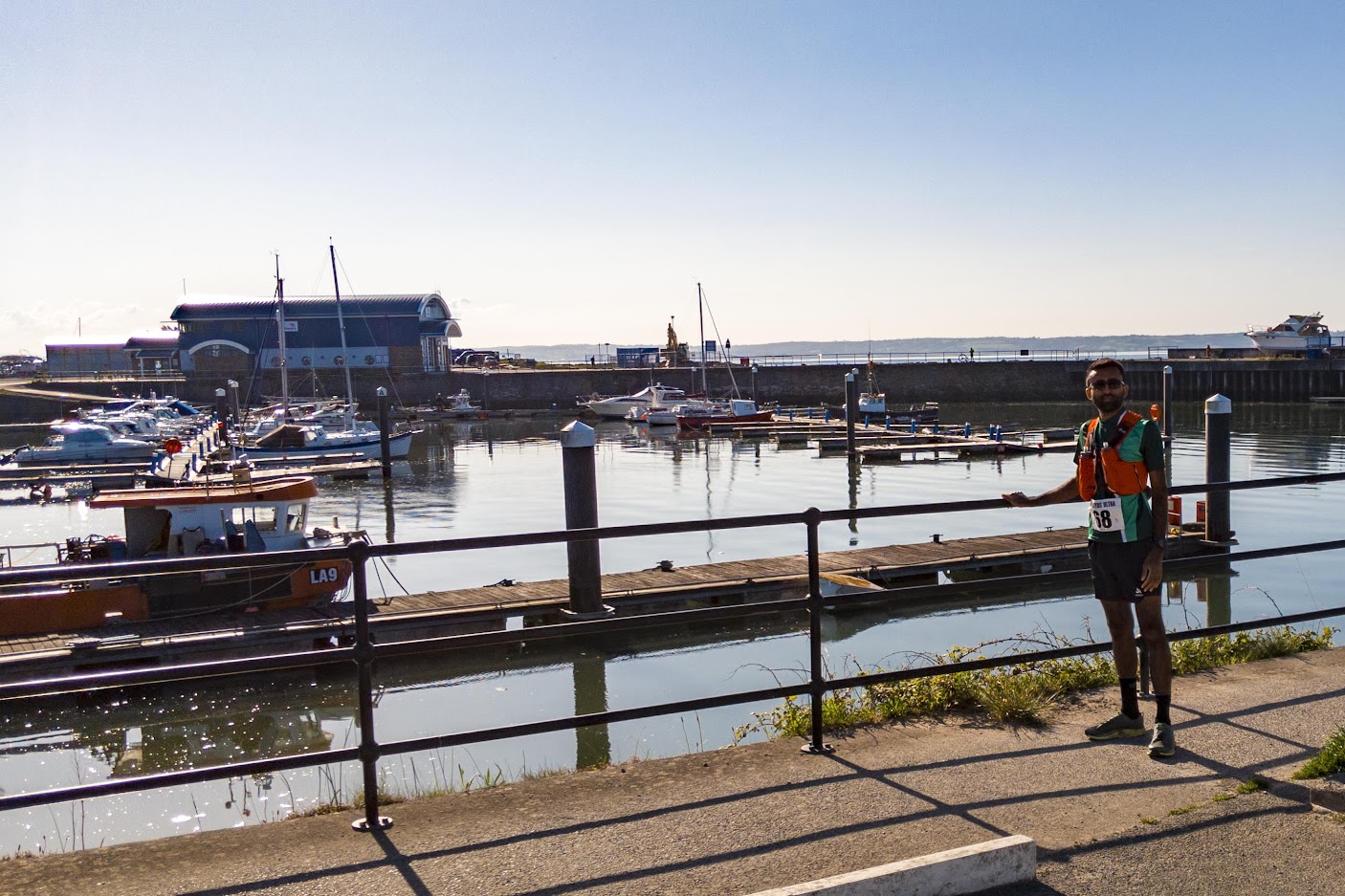 The race is a multi-terrain job but starts near the coast at a local yacht club. The race has an extremely friendly and intimate atmosphere and is billed as a tough but accessible and enjoyable route into ultra running. The race is wholly organised by two locals and put on with the help of some fantastic volunteers and supporters.

The photo below is the amount of hands that went up when it was asked as to how many were here doing their first ultra-marathon. This will hopefully give you an idea as to the vibe and general feeling around the race – one that is very beginner friendly and supportive. Even though the race has an insanely generous cut-off of 8pm, a full eleven hours after the start, the organisers still made the effort to check in on the last two finishers and stayed behind at the end to hand them their medals and t-shirts, something quite refreshing to hear if you have read about the treatment those in a similar situation faced at the London Marathon.

The course is an out and back affair and, as previously mentioned, is on varying terrain, with a mix of trail, road, woodland and fields. Starting from the Yacht Club, the first (and therefore last) five or so kilometres go out on the adjacent National Cycle Route, giving one a flat thirty minutes to dial in and get comfortable. 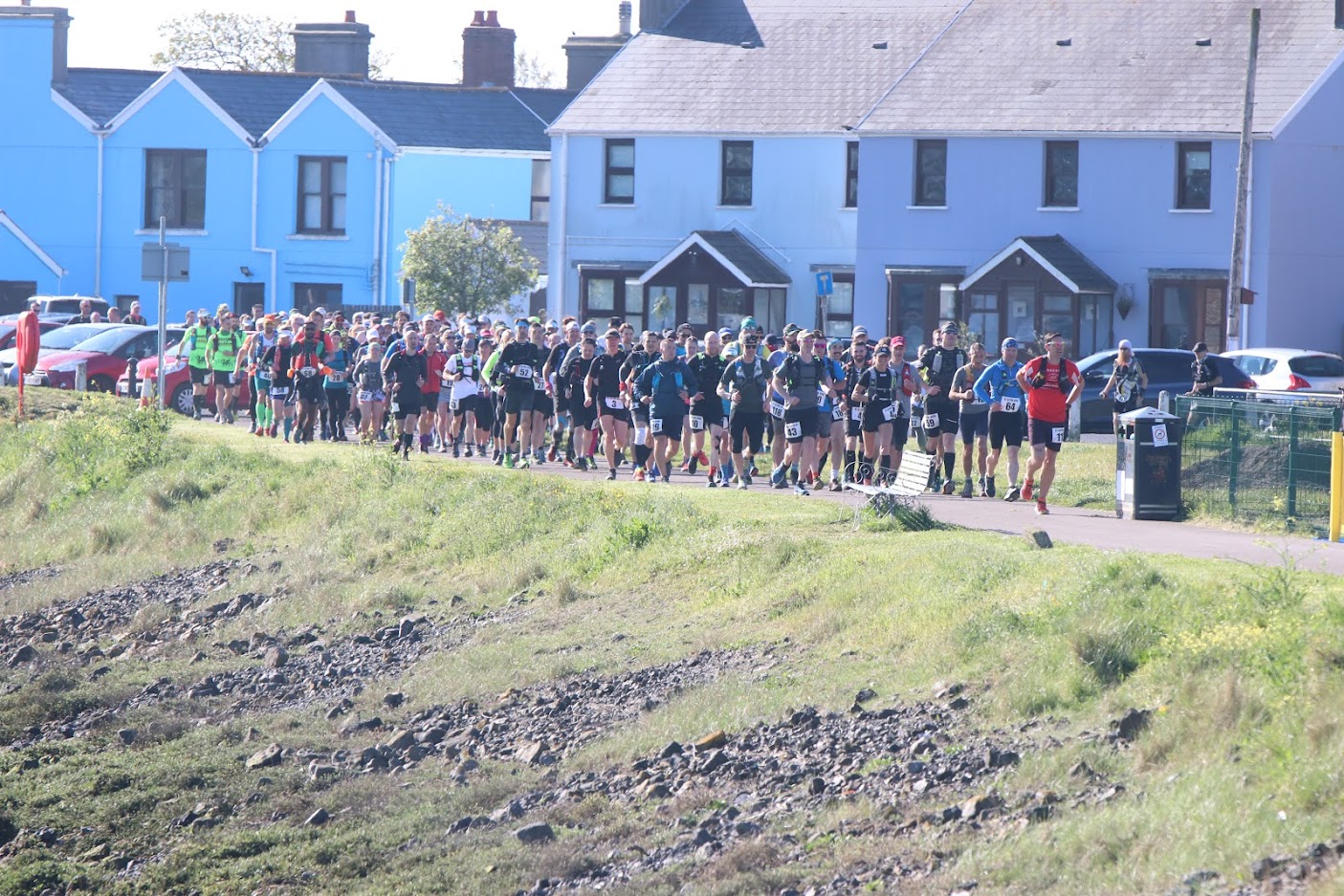 If you didn’t know by now, I have been and am a runner who runs by feel and if I do use a metric in a race, it’s power. In the course of my training I had had the time to get in a couple of long runs over the marathon distance in addition to the longer races I had done. As well as serving as crucial long quality sessions they also allowed me to marry the data I get to what I feel out on a run.

Up to this race my experiences had given me the following bits of valuable information: the power I can hold during a sixteen mile race, a twenty mile race and a marathon at race effort in addition to my ‘forever pace’, which is an intensity I can hold indefinitely.

In between this forever pace and my best race efforts lies, somewhere, the intensity that I can hold for these extra long ordeals and my eventual goal race. I just needed to find it. These intermediate races then are a great opportunity to get down in the weeds and find out how far I can really push myself.

My strategy from the start line was to maintain an effort I knew I could hold for four to five hours without issue until the half-way point, at which point I would consciously make the effort to negative split the race and use the last stretch down the cycle path to push my body to in order to see the kind of quality I could hold at the back end of several hours of running because as we know, endurance is simply an extension of quality. 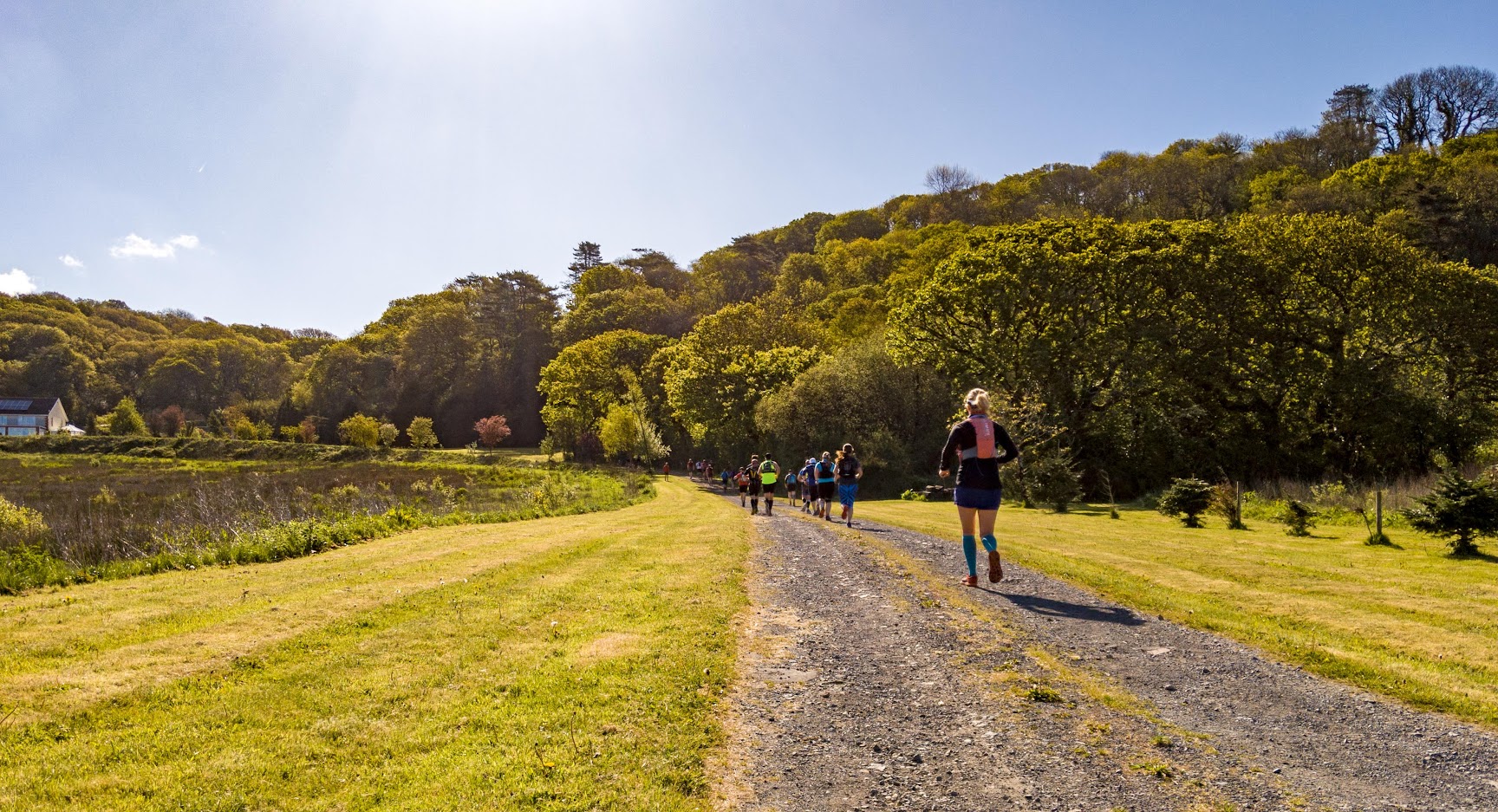 Once we got to the hills, the beginner-rich field began to exhibit all the different variety of behaviours you might expect from such a diverse group. My deep love of downhill running was the first to be tested as I love to throw caution to the wind when flying down the slopes and had to share the path with those who adopted a more sensible strategy. Not that I blame anyone for employing a strategy of putting one foot in front of the other – the adverse cambers and uneven terrain typical of the countryside aren’t to be taken lightly, but hey, you only live once, right?

A bit further into the race as things spread out my strategy of even pacing was in full effect. Unlike a fell race where the slopes are so steep you are either walking all the way to a peak as your calves bend to breaking point, and then trying not to snap your legs in two as you free-fall down similarly vertical descents, the varying gradients of a more ‘normal’ race at least allowed me to get down into the granularity of the act of running. Using readings from my power meter I was able to keep running whenever and at every opportunity I could- if the steepness of the slope meant that running would automatically make me go at an unsustainable pace I could ensure I walked. Then, when walking up the slope became too unnecessarily slow, I was able to check myself and switch back up to a snail’s pace and beyond again.

With the running strategy set on auto-pilot, the hydration and fuel strategy was the only other worry. Or not. One of the attractions of the race were the fully stocked aid stations, more akin to a full on picnic than anything else. It could be argued that the real challenge of this race is not stuffing your face and stopping for too long at each checkpoint, such was the temptation of all the treats and delights on offer! 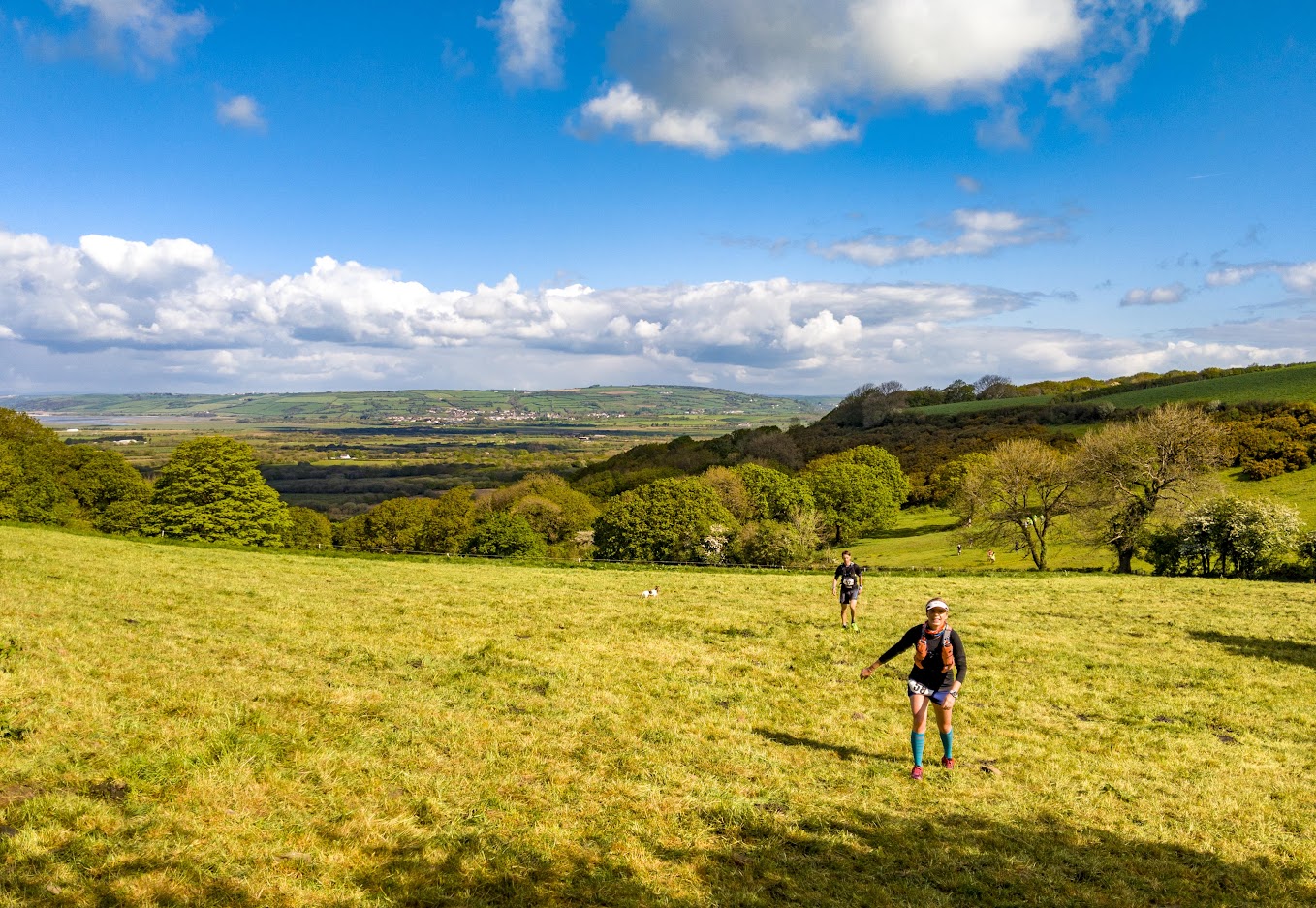 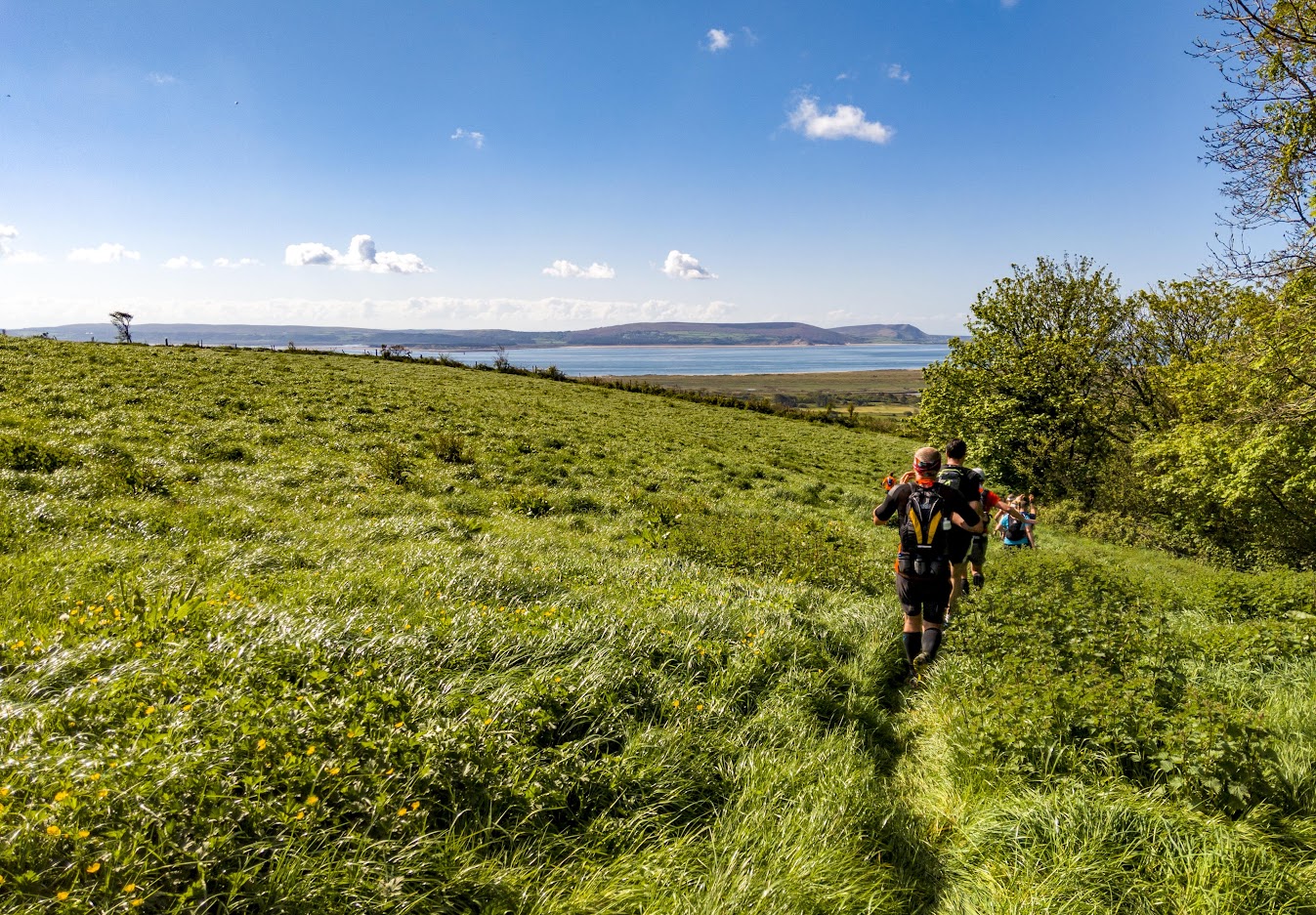 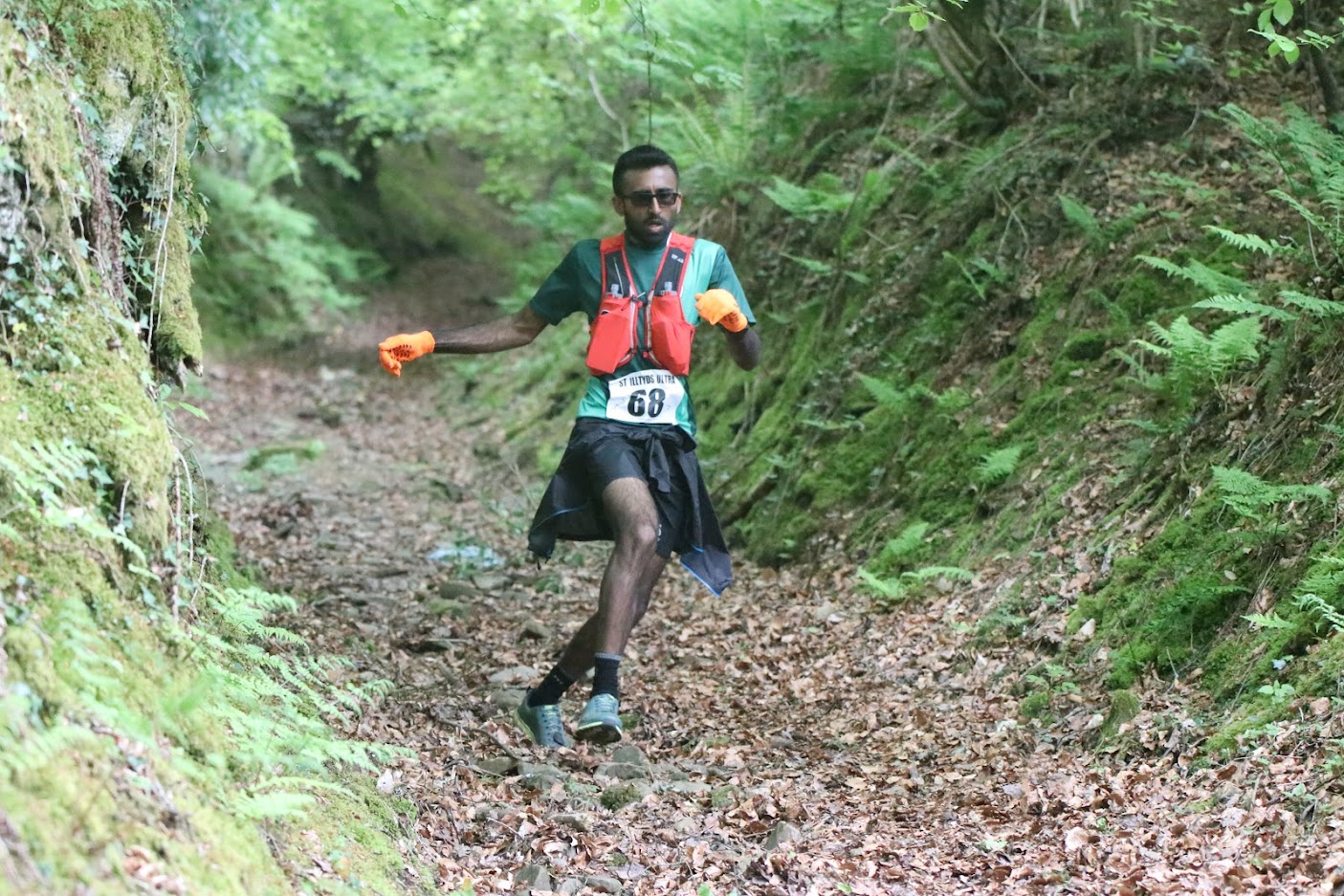 So, as the checkpoints, hills and descents rolled away I started to see, and then count, the runners coming back towards me after having past the turnaround point. One, two, three, four… ten… twenty… before I lost count.

The half way point was up past a foray through a shaded wood on the outskirts of a reservoir. This was the point where I would try and up the pace slightly and test myself in conditions somewhat closer to what I might experience on race day.

After filling myself up with goodies and a flask filled to the brim with coke I embarked back the way I came. One of the pluses of an out and back race is the smiles and encouragement you give and receive from all the people you get to run past. This undoubtedly provided a boost to me each time it happened and with this added impetus I picked up the pace as well as an increasing amount of runners who had begun to slowly lose the pace they had maintained during the first half of the race. 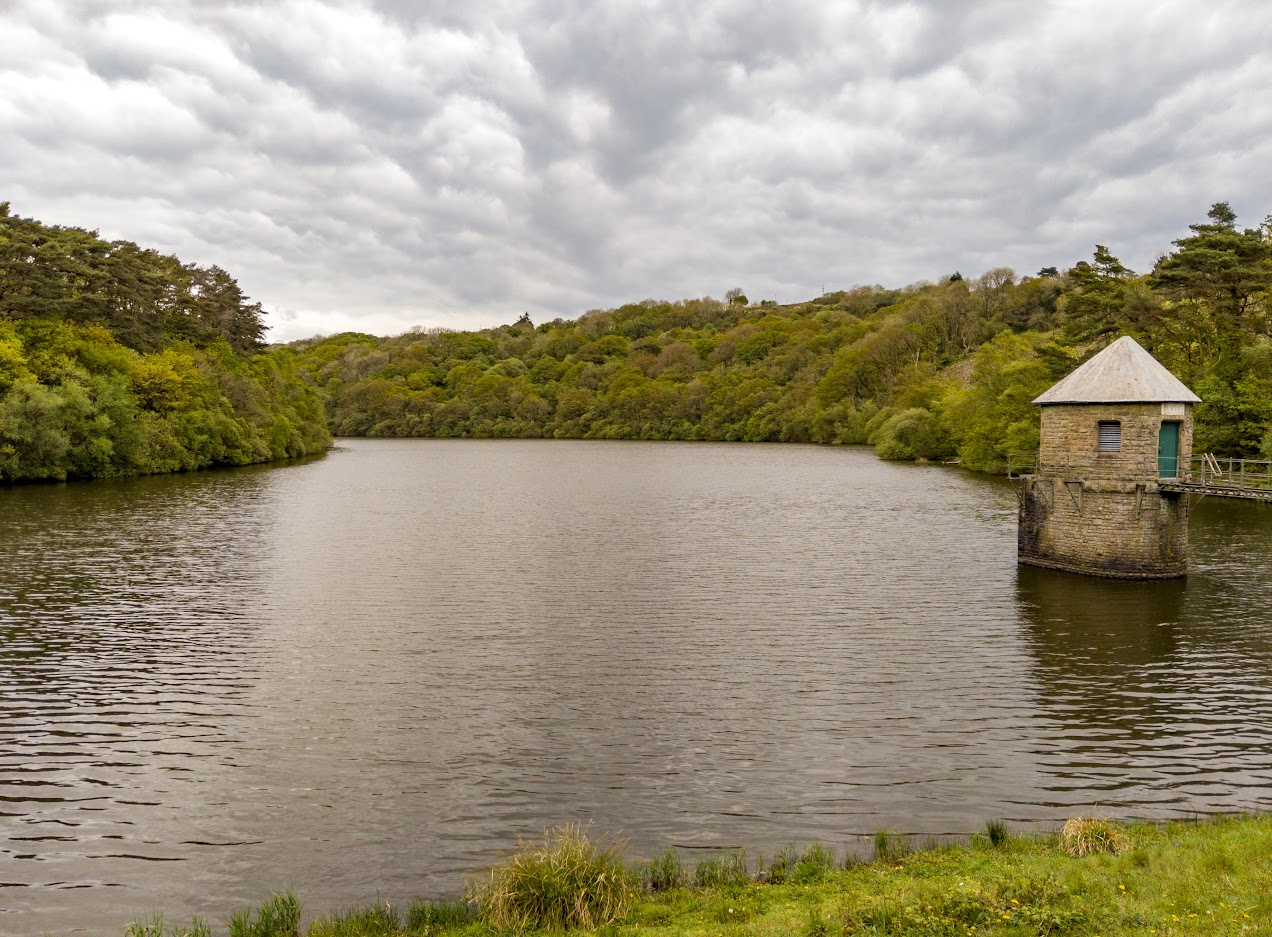 Second half to finish

To make a long story slightly shorter, I was able to execute the second half about as well as I would hoped to have. As the field spread out and with no worries as to where to go, I settled into a state as close to the mythical flow as I have ever gotten. 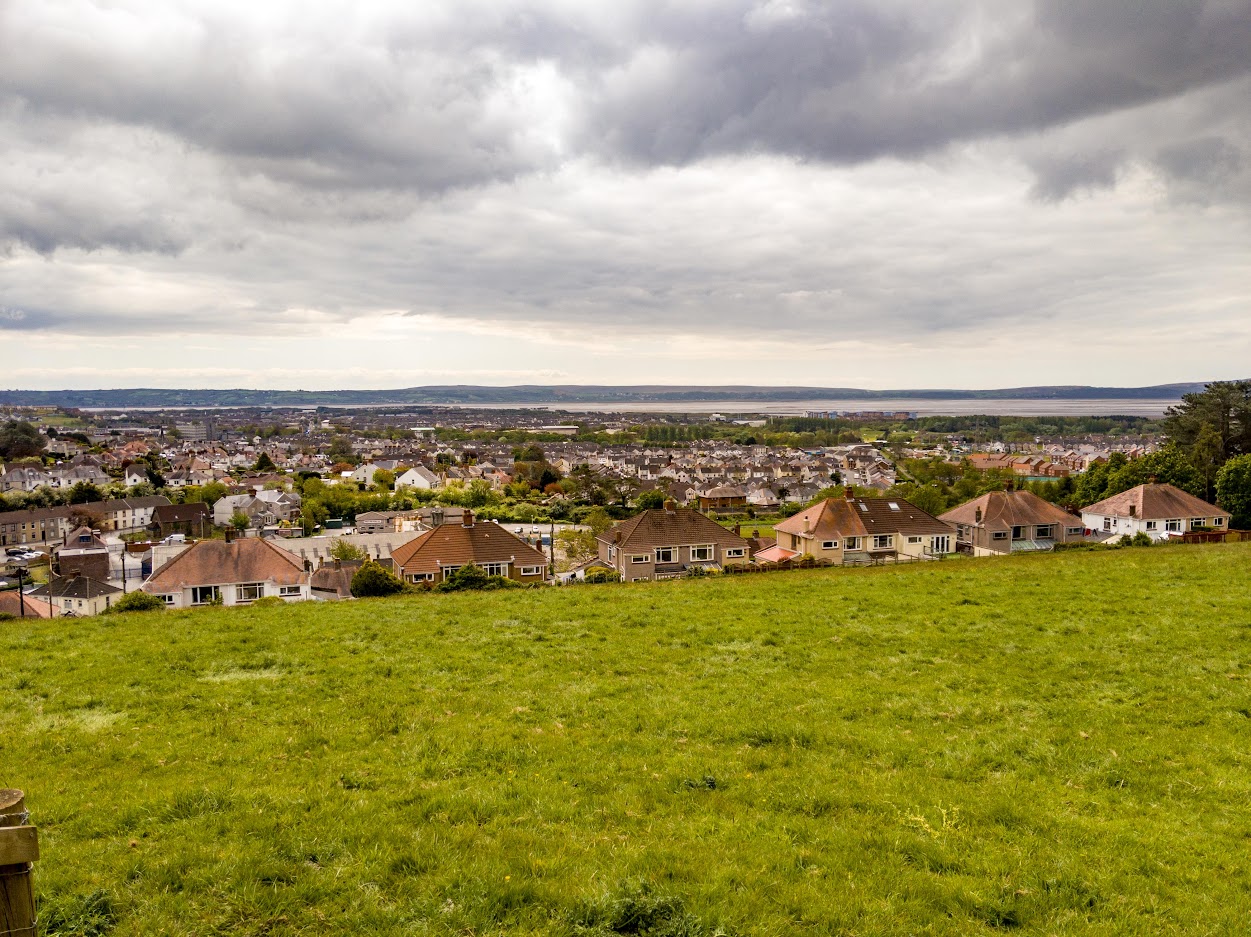 I minimised the time I spent at the checkpoints, simply wanting to get back to running as soon as possible after refuelling. The only minor blip of the entire experience was when I tripped over coming back through a wood of bluebells. My mind raced through the implications of an obvious slight pull of my left hamstring, from whether my race was over so close to the finish to what the effect would be on my training and next week’s race as I was fortunately able to get back into stride and onto the finishing straight. 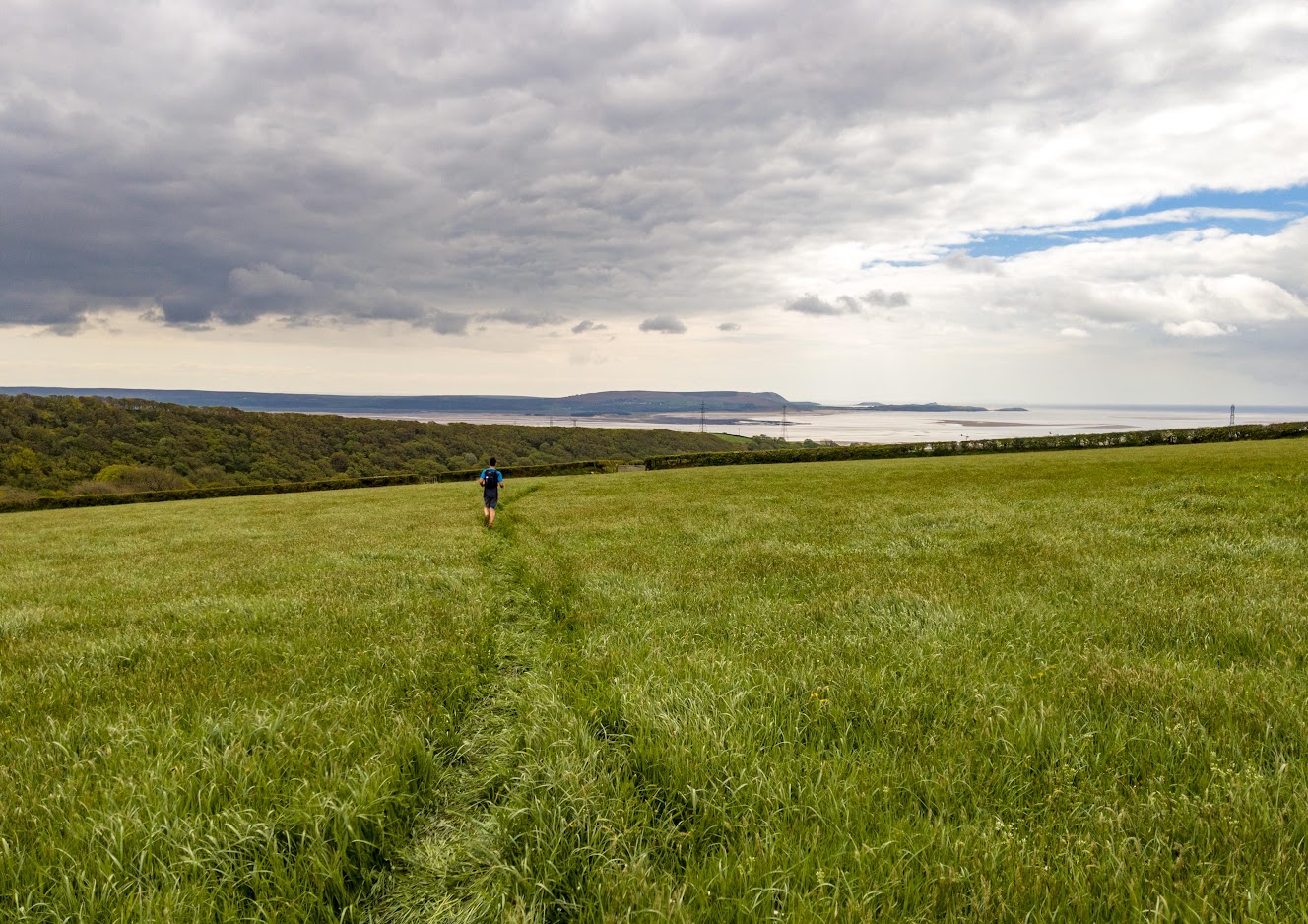 In the end I was able to come into the finish having maintained a faster-than-marathon pace for the last six or so kilometres back along the cycle path to the Yacht Club and having also easily achieved my ambition of pushing the pace after the turnaround point.

The support and greeting at the finish was plentiful, generous and extremely uplifting and the medal and finisher’s t-shirt was definitely worthy of the event. My goal of building up my confidence  to be able to race to the best of my ability on the big day was achieved as I continue to learn more about what I am capable of. I am glad to report that my enjoyment of my running continues to flourish in these longer distance events. 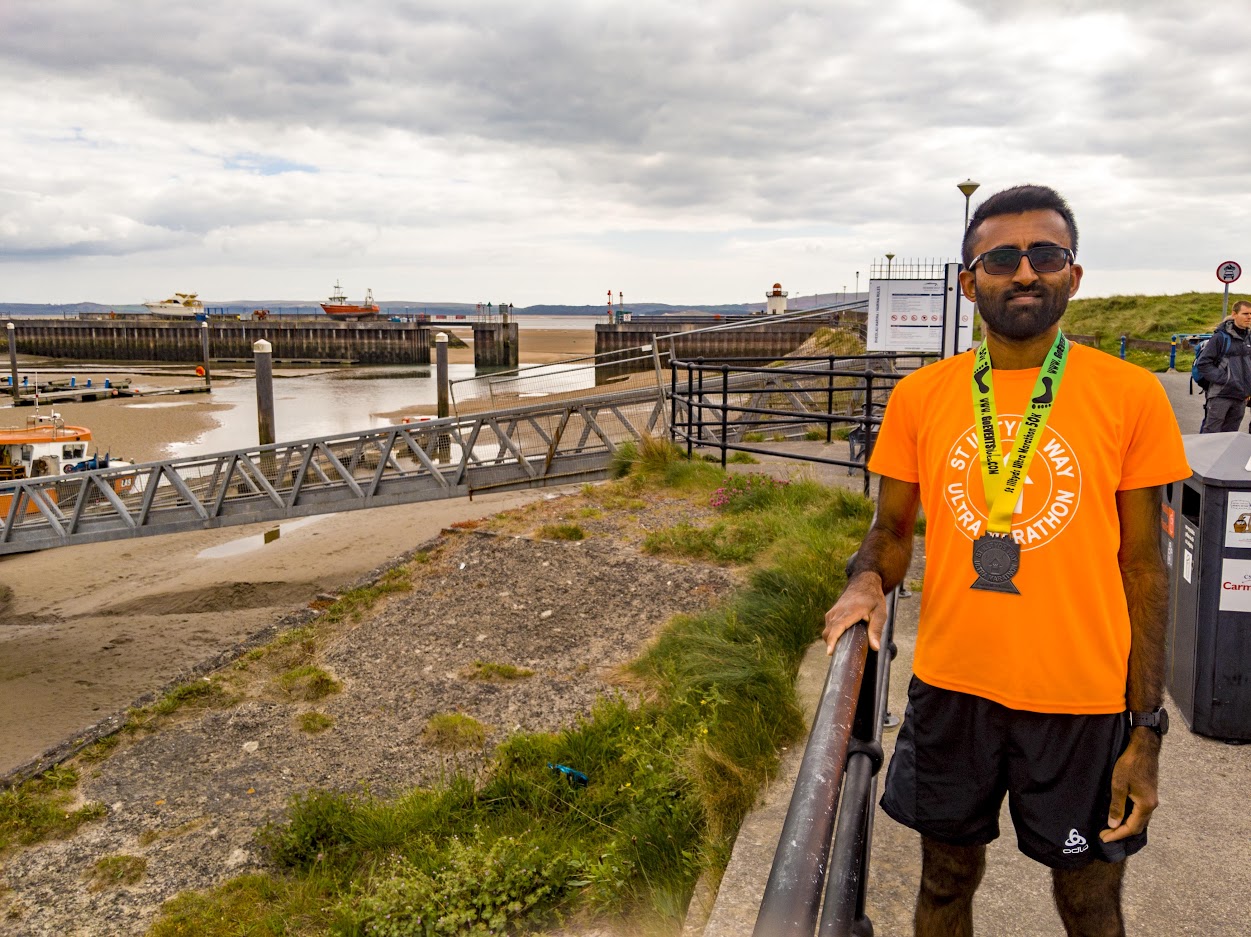 While this is without doubt a trying and demanding race, I would struggle to think of a race more suited for one to take the leap at trying their first ultra if so inclined. The views, support and atmosphere were as good as any event I have been to and it is now my new favourite race at the time of writing.

A brilliant race, organised with love and an absolute pleasure to run from start to finish!